Katherine Johns has been the elementary music specialist at Floresville Elementary School in Floresville, Texas since 1998. Mrs. Johns received her Bachelor of Music degree from the Stephen F. Austin State University in Nacogdoches, Texas and her Master of Music degree from Texas State in San Marcos, Texas. She completed her national Organization of American Kodály Educators (OAKE) Certification in Kodály Studies at Texas State. She is the President of KET (Kodály Educators of Texas). She is currently a member of the professional music organizations OAKE, KET, and TMEA. And in 2011, she was named "Teacher of the Year" for Floresville South Elementary and the district.

Please turn in the recorder money, $3.25, labeled with student's a teacher's name.

Please turn choir letters in by Friday, September 9th. Choir begins on the 12th. Pick up is 4:00.

First day of choir will be Monday, September 12. 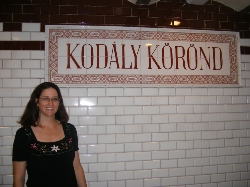